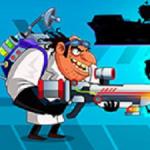 The Mad Scientist needs your help to dominate this lab at Gogy action game. This is a combination of gun shooting games and action games. In the hidden lab, despite the security, some bad guys have gotten inside and taken over. You need to guide the Mad Scientist to roam the place and shoot down these enemies. Each player has a weapon of his own to utilize during the journey.

When you look at the guards, each of them has an energy bar on top of their heads. You can keep check of their energy using this feature. Some strong guards will only be knocked down after two or three shots, so try to aim precisely. Moreover, keep in mind that if the scientist fails to shoot, he will get electric shocked in return. Since the lab is filled with enemies, they will keep approaching you.

The scientist will also not stop, so you need to dodge the attacks. In this game at http://www.gogy.games/, jumping and running with the scientist will bring you many fun moments. Go as far as you can by collecting all 10 types of weapons. Keep your eyes open and look for various items for the final secret improvements. The journey to get back the lab is long. Will you be able to survive? Test your ability with more fun games which are Floating Alien City and Sentry Knight.

Move with the arrow keys and shoot using the space bar.