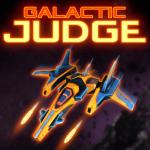 In Gogy new game with a shooting main theme: Galactic Judge, the players get to join a journey through space and time as they take over the galaxy in the high-end spaceship. The missions will vary depending on the destination that you are heading in each stage, but the goal remains unchanged. You will need to take control of a combat space ship and try your best to slip through the crowded space pirates, shoot them down and gather the required fuel for further exploration.

From the mission No.1 to No.5, the number of pirates will increase slowly to update the difficulty levels of the game. A tip is to continuously keep an eye on the fire rate, amour, weapons and damage rate of the ship to fix them. Before starting any mission, they can freely use the gained coins to purchase some more bar of fire rate or speed to make the next level more bearable an easier to win. Control the damage on your ship closely to avoid being shot to death too soon. Can you see the little icon at the bottom of the game? Beside it, there is a percentage number that shows how many times you get hit.

Also, your scores and defeated enemies are shown on the top of the game screen to help you control the progress better. Would you like to take on new space borders in other space games like Bowmastery Zombies and Tank Mayhem from the collection at http://www.gogy.games/?

Use the arrow keys or the mouse to control the movement of the ship.