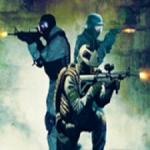 Army Commando brings the new type of leisure for the fans of shooting games. In this newly developed Gogy game, the players emerge in the intense world of battles. By completing the tasks on each level, you can open up new challenges. Use the gathered coins to purchase new guns and vehicles at the store. You will be paid like a mercenary is. At the beginning of each level, you are given a task with a specified amount of money. You will get that reward of the task is fully completed.

For example, you might be required to take down three enemies, reach a certain checkpoint and many more cool tasks. It is suitable for exciting game lovers, especially the players who are familiar with an extended map where they have to optimize the gun techniques. Choosing the right gun for each purpose and situation is something you will learn after taking part in the battles here at http://www.gogy.games/. Can you kill the enemies to protect your world?

Work in the team and balance out the advantages and disadvantages of your team to win quicker. Like any other shooting games in 3D, you can look forward to a large map with elaborated details. Hidden objects are also scattered inside the boxes and under some other infrastructure.

Keep in mind that you should check the energy left after a while to maintain the speed and power in the game. Can you balance out all these tasks while locating and killing the enemies? We have tons of good shooting games like Crazy Shoot Factory 2and Outlive The West waiting for players to explore.

Move with the WASD keys

Aim and shoot with the mouse cursor.