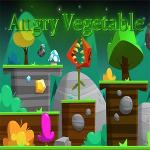 Instead of taking down the towers with the angry birds, you can enjoy another updated version of Gogy free game: Angry Vegetable where your bullet and theme will be the vegetables. It's the rebel of the vegetables to save themselves from the fate of being eaten by a human. Will you take their sides and help them carry out the vengeance? You will aim at the human's infrastructure using every angry vegetable that you own.

Make sure that you manage to take down the requirements for each level such as a specific number of blocks, several scores or finish within limited time range. Aim so that the blocks of the platforms will fall upon the people who are hiding inside it. If it's critical situation where you are running out of moves, just use the booster such as the TNT to blow up some steam. Will you be able to dominate all 12 levels with your army of vegetables? It's will not be easy to defeat the hidden human since they tend to choose the sneaky point and hard-to-reach spot.

A tip for the newcomers is to aim for the weak bars and lower space instead of the big and steady blocks. That's how you can bring down the tower from the top to the bottom withou spending too many moves. Prepare for the fight of the new generation at http://www.gogy.games/ with more hilarious arcade games like Journey To The North and Urban Subway Hooligans.

Drag and release the mouse to aim and shoot the vegetables.